Why Bitcoin's Halving Might Not Boost BTC's Value This Time Round

Previous halving events have resulted in Bitcoin gaining in value. However, current market environment might hinder a boost in price.

A tweet by legendary commodities trader, Peter Brandt, has sparked a lot of debate regarding the upcoming Bitcoin halving event and its effects on the value of BTC. In the tweet, Mr. Brandt suggests that the event is grossly over-rated and that the real supply of BTC is equivalent to its daily trading volume. He further explains that the daily reduction in mined BTC is roughly 1% of this value. His tweet can be found below. 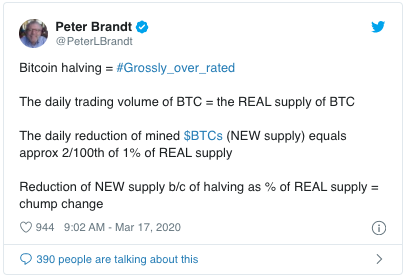 Several members of crypto twitter have thus responded to the tweet with a summary of their arguments being as follows:

Why Bitcoin's Value Might Not Be Boosted by the Halving

Whether Mr. Brandt's analysis is right or wrong, is a debate that will probably be worthy of a research paper. What we do know is that the world as we know it is coming to terms with the Coronavirus pandemic. As a result, global economies have been hit hard with the Dow, S&P 500 and Oil dropping significantly in the past two weeks. As a result, the United States is considering bailouts as well us giving all its citizens a cash stimulus in the coming days. Governments all over the world are doing all they can to prevent a recession in their respective economies.

It is with the above global economic environment, that Bitcoin's halving might not have the desired effect on the price of BTC. We saw in an earlier analysis, that the value of BTC might be headed to the mid or high $2,000 levels if there is a confirmed recession.

Litecoin's Halving Last Year, Was Perhaps a Warning for Bitcoin

It is often said that Litecoin is Bitcoin's little brother and LTC might have revealed that the effects of halving events on the value of a coin are dwindling with time. Litecoin's last halving was on August 5th, 2019. The coin's value peaked on 20th June 2019 at $145. This was approximately 46 days before the event.

Further checking the countdown towards Bitcoin's halving, we find that the event is 55 days away. This, in turn, could mean that the halving has already been priced in and we are truly in a bear market.

Disclaimer: This article is not meant to give financial advice. Any additional opinion herein is purely the author's and does not represent the opinion of Ethereum World News or any of its other writers. Please carry out your own research before investing in any of the numerous cryptocurrencies available. Thank you.